By ADAM SCHRADER
Published in Community Impact Newspaper on May 15, 2017

Arts and culture have significantly boosted Georgetown’s economy, with the city reportedly gaining a regional reputation for such attractions.

“You are the epicenter for arts and culture between Austin and Temple,” said Travis James, a representative for TXP, an Austin-based public policy firm that presented its findings during an April 25 City Council workshop. “You’re successfully keeping residents in the community spending money, and you’re drawing in residents from other communities to spend their money.” 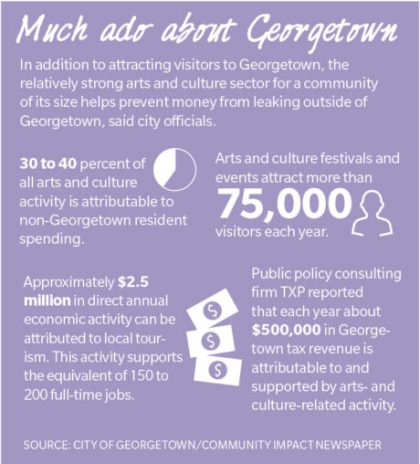 City policy decisions dating back to the late 1990s, including the transformation of a former fire station into an art center, have been made in an attempt to rejuvenate the downtown area.

“Former elected officials, public sector staff and the community at large should be commended for having made these forward-thinking decisions that took years to develop,” the city-commissioned TXP report stated.

Last year, the city hired Catalyst Commercial to create a strategic plan for recruiting retailers. The study, referenced by TXP, said total retail sales increased 161 percent between 2012 and 2015—an increase many business owners attribute to arts and culture activity.

Eighty percent of downtown business owners who responded to a TXP survey said tourists are important for their businesses. Arts and culture events and activities moving from downtown would significantly hurt sales, according to 68 percent of respondents.

Danny Solano opened clothing retailer Sincerely Yours 1848 with his wife, Cat Solano, in October. He said arts and culture events drove them to establish on the Square and have already helped boost business.

“But it’s not just about what the arts can do for us. It’s what we can do for the arts,” Solano said. “Out-of-towners deciding to attend a show at Palace Theater want to know what else they can do downtown—like shop.”

Georgetown ISD operates two performing arts facilities that have had a significant economic impact for the city, the report said.

More than 18,000 nonresidents attended events at the two theaters during the 2016-17 season, according to TXP research.

“GISD planned to cut its art budget in 1994, but the community had an uprising and the school board ultimately decided to cut the budget elsewhere. That was the propeller that created such an interest in the arts in town.” — Kimberly Keller, Georgetown artist

Meanwhile, The Sarofim School of Fine Arts at Southwestern University has been “a premier destination for arts and culture in Georgetown for more than 75 years,” according to the report.

“[It] is Georgetown’s higher education hub of creativity and inspiration,” the report said. “The Sarofim Series of Music brings some of the most sought-after musicians to Georgetown.”

The school’s theater and music departments also produce recitals and concerts that are attended by more than 9,000 people yearly, according to TXP research.

Tim Cobb, the university’s new vice president for integrated communications, said his department has realized an unmet demand for Southwestern productions and will soon work harder to promote them.

“It’s a real shame that some people don’t show up simply because they don’t know about it,” Cobb said. “It’s a problem with lack of communication not a lack of interest. So that’s on us to make that happen.”

Local artist weighs in on Impact

Most local artists are best described as part-time professionals or active hobbyists, according to TXP research. Less than 50 residents support themselves full-time through art, making about $47,000 a year. However, the report said another 250-500 residents in Georgetown make some money selling artwork at an average price of $2,800 per piece.

Kimberly Keller taught art in GISD for more than 18 years before moving to the private sector. She said she supports herself full-time with art classes and selling art.

“GISD planned to cut its art budget in 1994, but the community had an uprising and the school board ultimately decided to cut the budget elsewhere,” she said. “That was the propeller that created such an interest in the arts in town.”

“It has long been recognized that there is a direct economic connection between a vibrant and dynamic arts and cultural community and a successful tourism and hotel industry.” — TXP city-commissioned report on Georgetown’s creative sector

Keller, who graduated from Southwestern, said Georgetown residents do not always buy art at the cost it takes to produce. But she said the demand for consuming arts and crafts remains high.

“Artists, without a doubt, have had an impact on the economy,” Keller said. “My kids when they visit from Dallas even say that if Georgetown was artistic and cool when they were here in high school, they never would have left.”

Of these artists who generated their full-time income from original works of art, nearly 86 percent indicated their income was overwhelmingly generated in Georgetown by sales to city residents.

Artists who responded to a TXP survey said a lack of downtown parking availability was a concern that, if addressed, would increase attendance and generate higher revenues for artists and the city. Several mentioned that support for additional venues and shows would help draw potential patrons.

“We don’t have anyone else of Dalhart Windberg’s, [of Windberg Art Center], caliber in Georgetown yet. He’s really top of the line,” Keller said. “But Georgetown will have more artists of his quality and prestige soon if Georgetown continues to market its local artists.”

Strategies to enhance the arts

The report recommended the city hire a full-time arts and culture manager to act as a liaison between arts and culture groups, manage the city’s grant programs, apply for grants and maintain the city arts calendar.

“It’s too difficult to have people from different departments try to cobble it together,” James said. “Most cities your size have this type of person.”

The report also said that the city should formalize the Georgetown Convention and Visitor’s Bureau as the lead marketing entity for the arts in Georgetown.

“The CVB is already doing a great job. They have the resources and have the staff,” James said. “You don’t need to reinvent the wheel. Just formalize that role.”

The report also recommended that the city allocate 15 percent of hotel occupancy tax funds to promote and support the arts, which is allowed by state law.

“It has long been recognized that there is a direct economic connection between a vibrant and dynamic arts and cultural community and a successful tourism and hotel industry,” the report said. “The construction of the Sheraton Georgetown will only increase the capacity for the city to attract even more arts and culture tourists.”

“Having access to such great local artists enhances the experience for all of our guests,” she said. “The variety of arts and culture in the community contributes to both our quality of life and to the allure of the destination for visitors.”

7 public art installations to seek out near the Georgetown Square

In addition to attracting visitors to Georgetown, the relatively strong arts and culture sector for a community of its size help prevent money from leaking outside of Georgetown, said city officials.

iThere are no comments

Begin typing your search above and press return to search. Press Esc to cancel.