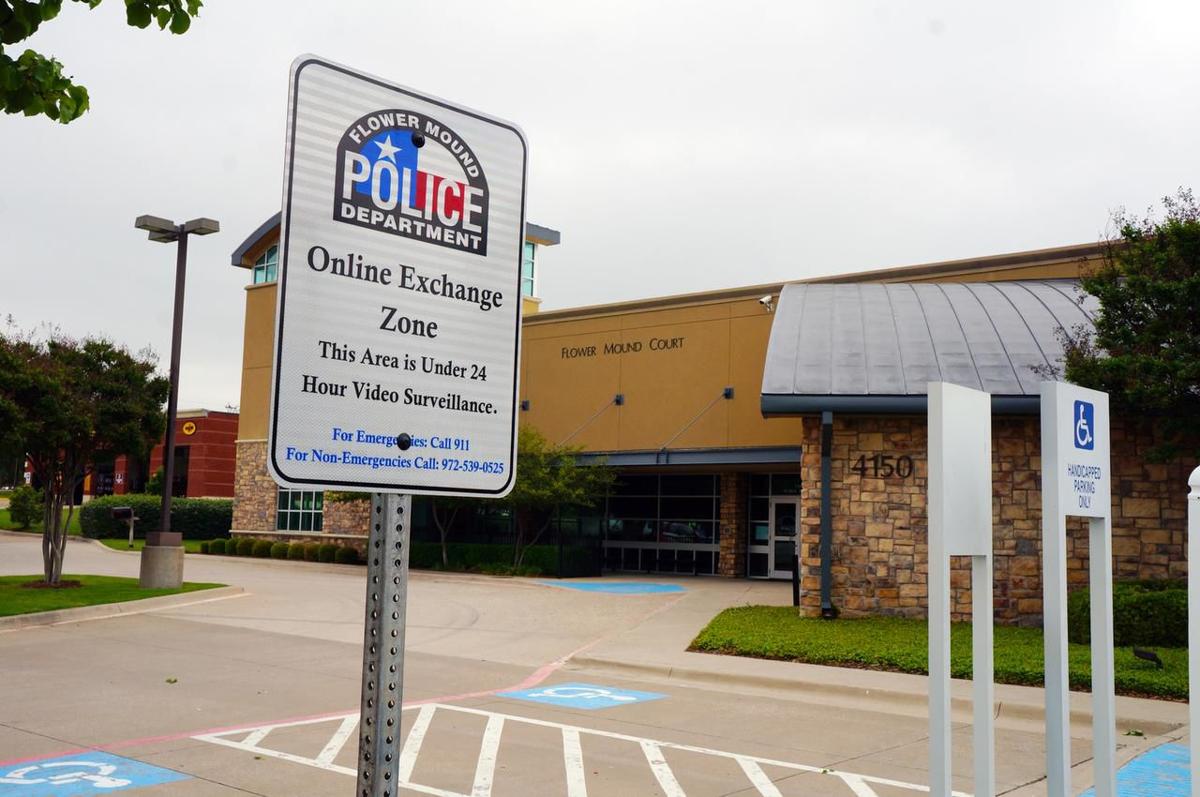 By ADAM SCHRADER
Published in The Dallas Morning News and The Denton Record-Chronicle on May 23, 2015

Wess Griffin, a Flower Mound police spokesman, said the signs are precautionary measures. So far, the town has been fortunate to avoid incidents in which an unwary buyer or seller gets ambushed when meeting someone with criminal intent.

“I can’t think of a single instance in Flower Mound where online transactions had gone wrong,” he said.

“If you’re someone who’s thinking about doing harm to someone else, hopefully you’ll think twice before trying to attempt that at the police department,” he said. “But I’m not going to say nobody would be brazen enough to try something in front of the police station.”

In February, Denton police Officer Orlando Hinojosa proposed the idea for online safe zones for Denton residents — also for precautionary measures. The safe zone in Denton is also at the police station.

“It wasn’t because we were having issues. Anybody will feel safe doing a transaction at the police department,” Hinojosa said. “If they don’t want to make the exchange at the station, I wouldn’t make a deal with that person.”

Online transaction zones have become popular because of several high-profile cases in which a buyer or seller went to meet someone and ended up getting robbed or killed.

A Dallas County state district judge recently declared a second mistrial in the capital murder case of Christopher Howard Beachum, according to a Dallas Morning News report. Beachum was accused of killing Gerald Canepa, 68, a man he met through Craigslist.

A post on the Richardson Police Department’s Facebook page mentions two robberies in which Craigslist sellers lured potential buyers to two homes in Richardson and robbed them at gunpoint. Similar crimes have occurred across the country, such as the case of Philip Haynes Markoff, the so-called “Craigslist Killer,” who is accused of one murder and two aggravated robberies in Boston.

Dan Rochelle, a captain with the Lewisville Police Department, said his station doesn’t have any designated safety zones. But residents are always welcome to do their exchanges at the station, he said.

“We’ve had plenty of reports filed that they didn’t get the merchandise they paid for,” he said. “But I don’t know of any that are violent in nature.”

“I have done quite a few Craigslist deals, and I would never go to [someone’s house] or ask the other party to my house,” he said. “I used a public lot near a restaurant I patronized where I knew employees. I parked in sight, told my buddies what I was doing and to watch, and also had my own defense if needed.”

Brenda Stiles Johnson, another Facebook user, wrote the safe zones are also a great place for a divorced parent to drop off children with the other parent. Johnson said her divorced daughter is more comfortable now when she drops off or picks up her child.

“My daughter loves that Flower Mound has a place,” she said. “She has been meeting her ex in front of Denton PD, but both of them are in our town a lot as both work here.”

Griffin said his department hadn’t envisioned that the safe zones could be used by divorced parents.

“For years and years, our police department has been used for custody exchanges, and we encourage people to do that too,” he said. “It’s always good if there’s any ill will there.”

Griffin said the benefits of buying or selling items at the police department is that the station is staffed 24 hours a day, every day of the year.

Additionally, the spots were chosen to be close to security cameras as possible, which would make it easier to identify suspects and vehicles.

Officers had not considered the possibility that some may use the safety zone for nefarious operations — essentially hiding in plain sight, Griffin said. For example, some drug dealers could think that conducting business in front of the station may prevent them from getting shot by potential buyers.

“I’d hope the safety zones would act as a deterrent, but you never know,” Griffin said. “We caught a guy stealing a bottle of hand sanitizer from our lobby on camera.

“If my dealer wants to meet me in the police department parking lot, I’m probably not going to show on that one. But you never know. Stranger things have happened.”