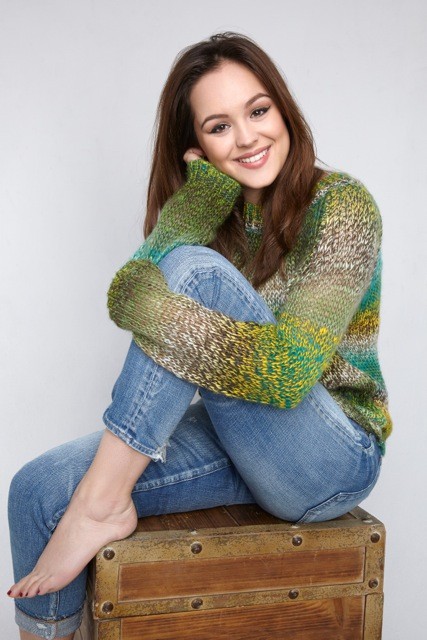 By ADAM SCHRADER
Published in The Lewisville Texan Journal on March 25, 2016

Highland Village native Hayley Orrantia, famous for her starring on the ABC comedy The Goldbergs, will do a hometown meet and greet from 5:30 to 6:30 p.m. March 30 in the new Central Park Courtyard between Patrizio and Chico’s at The Shops at Highland Village, 1701 Shoal Creek.

Orrantia will be available for photos and autographs and will accept donations on behalf of Christian Community Action (CCA). The event will be followed by a screening of her new film God’s Not Dead 2.

“I am so excited about the release of the movie,” Orrantia said. “It was a unique project that I was thrilled to be a part of.”

Brooke Thawley (Orrantia), a student grieving the loss of her brother, reaches out to Grace who shares with her the hope she finds in her faith. But when Brooke asks a question about Jesus in the classroom, Grace’s response lands her in an epic court case that could kill her career and expel God from schools forever.

It was easy for Orrantia to take the role, she said. Orrantia said she is a Christian and liked the character and the part she plays in telling the story.

“In a way, my character is the reason the conflict happens in the first place,” she said. “Over the course of the movie, Brooke changes a lot and I felt like this would be an awesome challenge for me as an actress.”

Orrantia said she easily relates to the struggles that her character endures in the movie but hopes viewers who might not will keep an open mind.

“Many people can relate to and enjoy the movie, but I know there will be just as many people who argue against it simply because it is not their belief system,” she said. “There’s a lot of information coming in through the story but I think the writers and director did an amazing job of telling it.”

This is Orrantia’s second full-length film after Cooper and the Castle Hills Gang, which she starred in with Lewisville native and friend Anne Winters. While Cooper was technically a feature, it was released purely as an advertisement for the Castle Hills neighborhood.

“God’s Not Dead 2 is a whole other ballgame,” Orrantia said. “Both are filmed in very different ways than The Goldbergs, seeing as that’s a TV show. It takes a lot less time to film the movies but all were awesome projects to work on.”

Orrantia has said in other interviews that singing is her “first love”. Acting entered her life by accident.

“Music was always something I just did, like other kids would have soccer or gymnastics,” she said. “Long story short, record labels thought that having an established fan base, such as from a TV show, would help them promote me as an artist. I love both so much and I will continue to both as long as I can.”

Orrantia’s father, Dan, said her career started by singing at small festivals around North Texas, along with performances put together by her music school. After discussions with record labels, she began taking acting classes at Cathy Sullivan Studios in Lewisville.

Orrantia eventually landed a spot as a competitor on X Factor with her band Lakoda Rayne. She said being on X Factor was both a positive and negative experience, and it didn’t help or hinder her career.

“As far as music goes, I’ve built my own business relationships outside of X Factor that had nothing to do with my participation in the show. Also, The Goldbergs had no idea I even sang when I got on the show,” she said. “X Factor is something I’m happy I did because I met some amazing people from it. But I’m happy that I was able to create a career outside of that.”

However, despite all of her success, Dan said his proudest moment as a father was the night Hayley’s band was voted out of X Factor.

“Riding back from the studio to the hotel, I said to the van driver ‘I guess this is our last ride, it was nice knowing you,’” Dan said. “He turned to me to say, ‘I just want you to know that in the two months I have been driving the talent to practice and to the studio, your daughter was the only person who said thank you to me every day. She is a very awesome person.’”

Dan said that Hayley has had a few auditions for the big screen and even more scripts sent to her that she decided just didn’t fit with her moral compass.

“When God’s Not Dead 2 was offered, we as parents were happy that she would be able to do a film that we had no concerns about her being in and has a positive impact for so many,” he said. “Perhaps someday as an actress she will be asked to do something on film that might make her uncomfortable but we will cross that bridge when and if it comes.”

Orrantia said she has written “so many songs of all different styles” that she can’t choose a favorite. But, her favorite acting role so far is Erica on The Goldbergs “mostly because this kind of comedy is my favorite and I get to incorporate music into my character on the show,” she said. Her favorite episode is an upcoming episode called “Big Orange”.

“I plan on continuing acting in The Goldbergs and hopefully any new projects that may come up,” Orrantia said. “I will also be working on my music over the upcoming summer. I plan to continue writing and recording as much as I can.”

Orrantia said she is happy to collect donations for CCA at the meet and greet.

“CCA is known for helping people with a variety of different things. I admire their dedication to support and help others in need,” she said. “Because they are a Christian organization, I felt it was appropriate to donate to them with the proceeds from the Gods Not Dead 2 premiere.”

Shoppers can enter to win one of three pairs of passes, six tickets, to the screening, which will take place at AMC Highland Village. Enter by “checking in” at The Shops at Highland Village on Facebook or Instagram though noon on March 29. The winners will be selected and announced later that day.

“As her parents we are proud of all she has accomplished and we hope that her talent and her goodness will bring her more,” Dan Orrantia said. “But more than anything we are proud of who she is as a person.”

iThere are no comments

Begin typing your search above and press return to search. Press Esc to cancel.